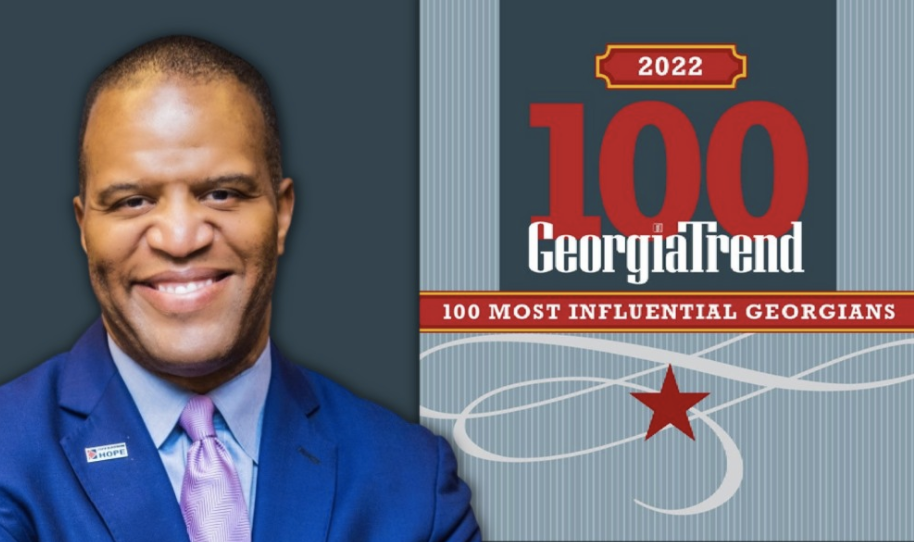 John Hope Bryant lauded for improving the lives of Georgians through financial literacy and economic inclusion in every corner of the Peach State.

ATLANTA, Jan. 10, 2022 /PRNewswire/ — Today Georgia Trend announced that financial literacy entrepreneur and businessman John Hope Bryant has been named to its list of 100 Most Influential Georgians.

Georgia Trend released its 24th annual listing, which includes CEOs, politicians, college presidents, nonprofit and economic development leaders, and more. The members of this distinguished list have committed to bettering the lives of Georgians and ensuring the state remains a national leader in business.

John Hope Bryant lauded for improving the lives of Georgians through financial literacy and economic inclusion in every corner of the Peach State.

Over three decades ago, Bryant founded Bryant Group Ventures, for which The Promise Homes Company is now its largest division. Since then, Promise Homes has grown to become one of the largest minority-controlled owners of institutional-quality, single-family residential rental property in the US with a focus on working and middle-class communities. Bryant is also a bestselling author of books on economics and leadership.

Additionally, Bryant served as a member of the President’s Advisory Council on Financial Literacy under President George W. Bush and President Barack Obama. As a champion for financial wellness and economic equity, he has also advised President Bill Clinton. At Bryant’s recommendation, U.S. Treasury Secretary Jack Lew renamed the former U.S. Treasury Annex Building the Freedman’s Bank Building, which was established by President Abraham Lincoln in 1865, to help develop newly freed African Americans as they endeavored to become financially stable.

“As I work to move America from civil rights to silver rights, I know Georgia is the birthplace of many movements that have changed the lives of the underserved. At Operation HOPE, we do not take that legacy lightly,” said John Hope Bryant. “I am honored to be listed among this notable group of changemakers and follow in the footsteps of those who have made our home state—notably the city of Atlanta— one of the greatest places in the world. Our work here is just beginning.”

About Operation HOPE, Inc.Since 1992, Operation HOPE has been moving America from civil rights to “silver rights” with the mission of making free enterprise and capitalism work for the underserved—disrupting poverty for millions of low and moderate-income youth and adults across the nation. Through its community uplift model, HOPE Inside, which received the 2016 Innovator of the Year recognition by American Banker magazine, Operation HOPE has served more than 4 million individuals and directed more than $3.2 billion in economic activity into disenfranchised communities—turning check-cashing customers into banking customers, renters into homeowners, small business dreamers into small business owners, minimum wage workers into living wage consumers, and uncertain disaster victims into financially empowered disaster survivors. Project 5117 is our multi-year four-pronged approach to combating economic inequality that aims to improve financial literacy, increase business role models and business internships for youth in underserved communities, and stabilize the American dream by boosting FICO scores. Operation HOPE recently received its sixth consecutive 4-star charity rating for fiscal management and commitment to transparency and accountability by the prestigious non-profit evaluator, Charity Navigator. For more information, visit, OperationHOPE.org. Join the conversation on Twitter, Facebook and Instagram.