The Firefighter Who’s On Fire for Financial Empowerment 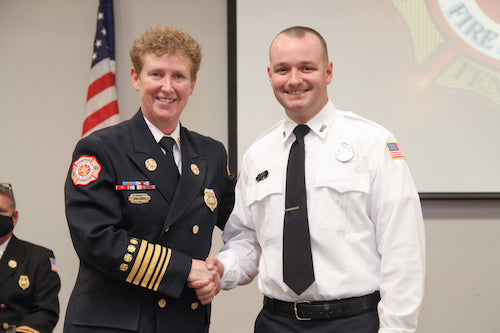 Travis Bricker, a City of Memphis firefighter had grown accustomed to putting his life on the line to rescue others.  Now he needed someone to toss him a lifeline so he could get his credit profile in order.  This is where Operation HOPE stepped in.

When you make your living putting out fires, you don’t expect to catch afire yourself, but that’s precisely what happened to 27-year-old Travis Bricker, a rookie City of Memphis Firefighter when he joined the Credit and Money Management program this past May.  Travis knew that he needed help, and with the collaborative partnership of Trustmark Bank with the City of Memphis on behalf of Operation HOPE and the City’s first responders, the help he knew he needed was only a phone call away.

When he entered the program, Travis Bricker said that he wanted to get his finances together.  “I need a budget and I want to save more money.”   Due to COVID-19, in 2020 he – like many others – ended up spending more money while also losing income, but he was determined not to let this define his life.

After he met Financial Wellbeing Coach, Regina Osei, and attended the Credit & Money Management Workshop as part of his mandatory in-service training, he knew that he needed to take it a step further by enrolling in the program and taking advantage of the one-on-one credit counseling.  Taking this step not only helped Travis to budget and save, but he also learned strategies to improve his 613 FICO TransUnion credit score.  “After our first meeting, Travis was given a work plan that detailed the steps required for him to attain his goals.  Because he was so serious, he got to work right away following the protocols necessary to manage his accounts.”  The result?  Today Travis is only 10 points away from joining the 700-Credit-Score Community.  What is remarkable is that his credit score has increased 77 points and is now 690, in less than three months.  In Travis’ own words, “I believe I am headed in the right direction and I plan to stay on this path.”

It’s nothing short of amazing to see this young fireman, ON FIRE!